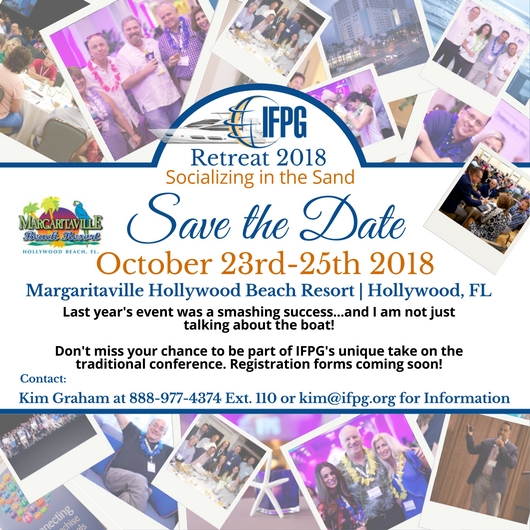 IFPG Retreat 2017 was a SMASHING success, and I am not just talking about the boat!
This is your chance to be part of a franchise industry event like no other. We have taken the boring out of the traditional conference and kept what works. Our Retreat is jam packed with the thing that matters most making connections!

Take a look at what some of the 2017 attendees had to say:

“The IFPG Retreat was the best event ever. We had a great time with all the IFPG Consultants. Thank you for such a fantastic retreat!”
Marcos Moura Amada Senior Care

“IFPG hit it out of the park. The IFPG Retreat was the best organized event with a very different and welcomed atmosphere, complete with an exceptional positive vibe enjoyed by consultants, franchisors, and vendors alike.  IFPG delivered an unusual new business intimacy that produced fantastic new dialogue among all attendees, such as the round-table discussions and one-on-one consultant/franchisor/vendor presentations, and yes, an over-the-top party cruise!I was amazed at how everyone seemed more engaged and sharing information, ideas, suggestions, and offering help and assistance to make IFPG the standout group in our industry!”
Bill King IFPG Contributing Member

“Thank you IFPG for a great event! I was not sure what to expect being our first one, but we are already looking forward to next years IFPG Retreat. Speed dating, round tables, dinner cruise, everything had a purpose and was executed flawlessly.”
Aaron Slattery Spaulding Decon

Don’t miss the boat this year!